Let me take you back. Three years back.

I had applied, and been accepted, to a British Council program for teaching English in Thailand. After being underwhelmed by the training days in London, hearing from a Thai government spokesperson and deciding it was all propaganda, and meeting the other successful (and rather questionable) applicants who couldn’t wait to get “pissed” and go to the Full Moon Party, I was not sure what to expect. I took solace in my ability to speak Thai and that I already had some understanding of the country.

After a few days spent being a recluse in Bangkok, it was time to head to the South, to Surat Thani. The school I was to work with had not sent an envoy to collect me, so I was handed over to a school not too far from where I would be based. At five o’clock on a Saturday morning, bleary eyed but fully prepared for the bus ride ahead of me, I made my way to the hotel lobby, dragging behind me my own weight in bags. I was met by Kru (teacher) Nam, and the two girls that had been posted to her school. For the purposes of this article, I will call them Sarah and Emily.

I had been rather dreading the bus ride, fully aware of the 12 hours that lay ahead of me. I had, however, come prepared. Dressed in a t-shirt and shorts, with a year’s supply of snacks and the tracksuit equivalent to thermals in my bag, I was ready to take on the sleeper bus’ powerful air conditioning and lacklustre blankets. Kru Nam, who has become an extremely special friend, was beaming light, happiness and excitement from the get go. I sat down next to her and we began to talk. She told me about her mother, her fiancé whom she had not seen in two years but spoke to everyday, her family, her hometown and her masters degree. At the risk of sounding cliched, twelve hours felt like two.

When we reached Kru Nam’s school, a group of children chased behind the truck shouting and waving in broken Thai. Kru Nam told me that the children were from a local community of displaced Burmese. As they did not have papers and could therefore not go to school, they would loiter around the school grounds trying to catch snippets of classes. Whilst many Thai look down on the Burmese, Kru Nam welcomed them into the school. She would encourage them to meet her after school, whereupon she would teach them basic Thai, and they would teach her Burmese in exchange. During my two days at this school, this little group of Burmese boys became my wingmen and bodyguards, keeping me company and teaching me new words. We compared tattoos — they ranged in age from four to nine and out-inked me on all accounts. 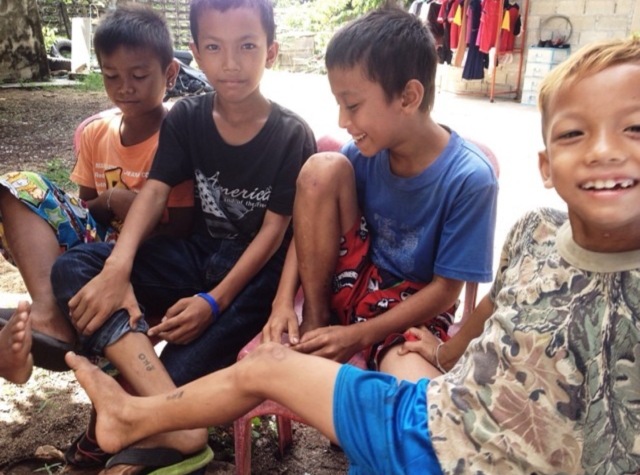 As we got to the school house, three teachers then came out of the school and welcomed Sarah, Emily and I in a way that cannot be described in words. The feeling of being truly welcomed is too rarely felt.They proudly showed us around their living quarters which were annexed onto the school. They gave up their rooms so that Emily and Sarah could have the best beds. When they heard me speak Thai, they gave me a more “Thai-style” room, because they said I would find it comfortable, whereas they were scared the “farang” (foreigners) would not. Next on the tour was the bathroom. I was thrilled to see an actual toilet. Such a treat, although I do enjoy the squat too. The washing area was clean with a bucket and water set-up. That was when both Emily and Sarah burst into tears. They ran up to their new bedrooms and from downstairs, all we could hear was hysterical sobbing for half an hour. The teachers turned to me, hurt and confused, and asked why they were crying.

I explained that the girls had probably never experienced a culture or living setup different to theirs, and that with time they would adjust. To this day though I still find it ironic that the British Council sent a troupe of inexperienced teachers to Thailand to educate children about British language and culture, yet forgot to give us would-be teachers any form of cultural or linguistic training. It felt like some sort of colonizing mission where thoroughly British ambassadors were dropped into different parts of Thailand to reeducate the locals.

After the crying had ceased, it was time to buy dinner. We jumped on motorbikes and drove to the local night market. Having Vietnamese and Jewish heritage means that for me, food is imbued with meaning: nostalgia, home, hospitality and family. The teachers laughed as I quickly made three laps of the market like a crazed diabetic in need of sugar. Before long, I was balancing longan, durian, Thai dessert, steamed vegetables, curry and noodle soups in my arms. When we managed to track down Emily and Sarah, they were yet to buy anything. 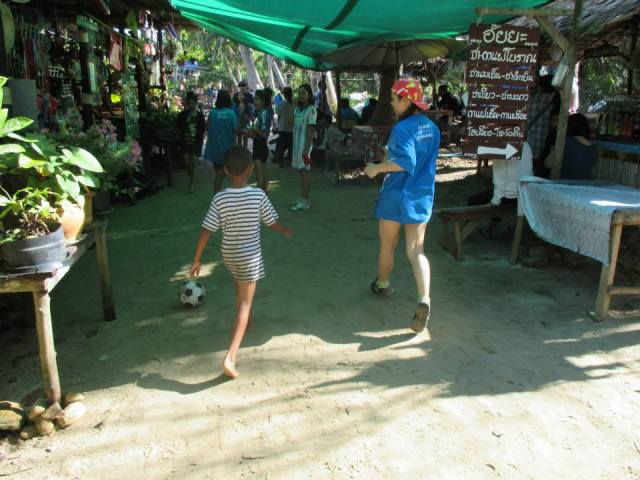 “What’s wrong? Why don’t you want to eat?” Asked one of the teachers.

“We don’t want to get sick. Everything here is so dirty.”

“We can show you what to buy — not all food is dirty.”

After another failed thirty minute reconnaissance of the market, they decided on popcorn for dinner, and then breakfast, lunch and then dinner again. It was a self-imposed diet fit for someone perpetually trapped in a cinema.

Sprouted in Vietnam, made in London, growing in Seattle. - I write, edit, curate, facilitate, manage change, mother, and strive to drink tea whilst it's still hot.

Respond to Tales from Thailand Pt.1 — Popcorn for Dinner